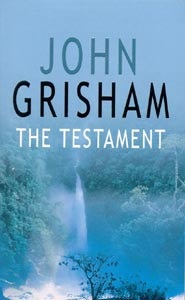 Troy Phelan, a 78-year-old eccentric and the 10th-richest man in America, is about to read his last will and testament, divvying up an estate worth $11 billion. Phelan´s three ex-wives, thei r grasping offspring, a legion of lawyers, several psychiatrists and a plethora of sound technician s wait breathlessly. However, the magnate shocks everyone with a bizarre, last-gasp attempt to redi stribute the spoils, setting in motion a legal morality tale of a contested will, sin, and redempti on. Nate O´Riley--a washed-up, alcoholic lawyer with two ruined marriages in his wake and the taxman on his tail--is dispatched to the Brazilian wetlands in search of a mysterious heir named in the will . After a harrowing trip upriver, he encounters Rachel Lane, a pure-hearted missionary living with an indigenous tribe and carrying out God´s work. Rachel´s grave dedication and kindness impress the jaded lawyer, so much so that a nasty bout of dengue fever leads him to a vision that could cha nge his life. Back in the States, the legal proceedings drag on and Grisham has a high time with Phelan´s money-hungry descendents, a regrettable bunch who squandered millions, married strippers, got druggy, and befriended the Mob. The youngest son, Ramble, is a multi-pierced, tattoo-covered malcontent with big dreams for his rock band, the Demon Monkeys. Will Nate get straight with Rachel´s aid? Do the greedy heirs get theirs? What´s the real legacy of a lifetime´s work? The Testament is classic Grisham: a down-and-out lawyer, a lot of money, an action-packed pursuit, and the highest issues at stake. It´s not just about great characters; it´s about the question of what character is.