Tremors in the Blood 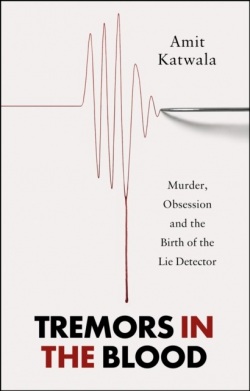 Tremors in the Blood

Truth, murder and the birth of the lie detectorHenry Wilkens burst through the doors of the emergency room covered in his wife's blood. But was he a grieving husband, or a ruthless killer who'd conspired with bandits to have her murdered?To find out, the San Francisco police turned to technology, and a new machine that had just been invented in Berkeley by a rookie detective, a visionary police chief, and a teenage magician with a showman's touch.John Larson, Gus Vollmer and Leonarde Keeler hoped the lie detector would make the justice system fairer - but the flawed device soon grew too powerful for them to control. It poisoned their lives, turned fast friends into bitter enemies, and as it conquered America and the world, it transformed our relationship with the truth in ways that are still being felt.As new forms of lie detection gain momentum in the present day, Tremors in the Blood reveals the incredible truth behind the creation of the polygraph, through gripping true crime cases featuring explosive gunfights, shocking twists and high-stakes courtroom drama.Touching on psychology, technology and the science of the truth, Tremors in the Blood is a vibrant, atmospheric thriller, and a warning from history: be careful what you believe.