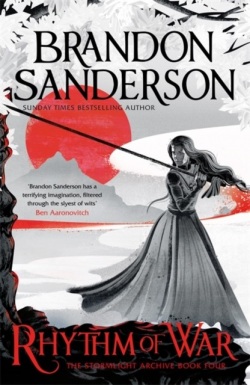 After forming a coalition of human resistance against the enemy invasion, Dalinar Kholin and his Knights Radiant have spent a year fighting a protracted, brutal war. Neither side has gained an advantage. Now, as new technological discoveries begin to change the face of the war, the enemy prepares a bold and dangerous operation.The arms race that follows will challenge the very core of the Radiant ideals, and potentially reveal the secrets of the ancient tower that was once the heart of their strength. Praise for Brandon Sanderson'Sanderson is an evil genius. There is simply no other way to describe what he's managed to pull off in this transcendent final volume of his Mistborn trilogy' RT Book Reviews (Gold Medal, Top Pick!) on The Hero of Ages'It's rare for a fiction writer to have much understanding of how leadership works and how love really takes root in the human heart.Sanderson is astonishingly wise' Orson Scott Card'Sanderson is crafting an extremely well-thought out saga with Mistborn, one that looks to stand above the pack of his literary peers. The magic system is perfectly detailed, the world, though not completely revealed, has a great sense of natural logic to it, and the characters are a reflection of both' SFF World'Intrigue, politics, and conspiracies mesh complexly in a world Sanderson realizes in satisfying depth and peoples with impressive characters' Booklist on Mistborn'Highly recommended to anyone hungry for a good read' Robin Hobb on Mistborn'Enjoyable, adventurous read' Locus on MistbornOther books by Brandon SandersonThe CosmereThe Stormlight ArchiveThe Way of KingsWords of RadianceEdgedancer (Novella)OathbringerThe Mistborn trilogyMistborn: The Final EmpireThe Well of AscensionThe Hero of AgesMistborn: The Wax and Wayne seriesAlloy of LawShadows of SelfBands of MourningCollectionArcanum UnboundedOther Cosmere novelsElantrisWarbreakerOther books by Brandon SandersonThe ReckonersSteelheartFirefightCalamity