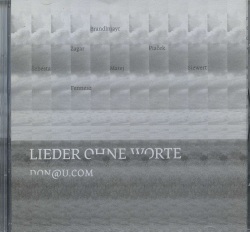 Christian Fennesz – laptop, guitarMartin Siewert – guitar, electronicsMartin Brandlmayr – drumsJudith Unterpertinger – celloMarek Piaček – flutes,voice and electronicsRonald Šebesta – clarinetsPeter Zagar – piano, synthesiserDaniel Matej – turntable, CD players, objects, electronicsThe idea of don@u.com was born in the fall 2002 when Daniel Matej and Martin Siewert met for the first time at Musikprotokoll ’02 in Graz, playing on the same evening and stage with their own bands Trapist and Vapori del Cuore. Sharing similar aesthetic concepts and approaches to improvisation they decided to form an occasional band “open to musicians united by the river Danube and – most of all – by common ideas”. The band then got its name in 2004, at the occasion of its first public performance. Since 2006 don@u.com plays in more or less definite line-up with 7 musicians (Bernhard Breuer, Daniel Matej, Marek Piacek, Martin Siewert, Ronald Šebesta, Judith Unterpertinger, Peter Zagar) and the sound engineer Roman Lašciak. The first CD presents a selection of the band’s first two projects, “Lieder ohne Worte” and “Lieder ohne Worte 2”, created and premiered at the (New) Music at Home ’04 in Šamorín and at the Evenings of New Music ’05 in Bratislava.“What would maestro Mendelssohn say about these Lieder Ohne Worte? Probably, he would be happy to listen to the music, which has a similar idea to his own of a romantic, lyric song performed by instruments only. In addition, he same formal concept of a homogenous form based on one musical ide. I listen to this music with pleasure, because of its beauty of sounds, its quietness and repetitive motives. It is music, which brings good feelings.” Zygmunt KrauzeTracklist1. 11:492. 5:433. 11:174. 8:435. 7:526. 10:537. 8:59http://www.myspace.com/atraktartlabel