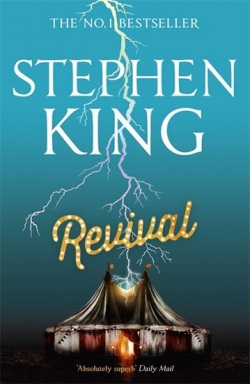 The No. 1 hardback bestseller, King's spectacularly dark and electrifying novel about music, the powerful bond between two people, addiction, religion and what might exist on the other side of life, is now available in mass market paperback.A spectacularly dark and electrifying novel about addiction, religion, music and what might exist on the other side of life.In a small New England town, in the early 60s, a shadow falls over a small boy playing with his toy soldiers. Jamie Morton looks up to see a striking man, the new minister, Charles Jacobs. Soon they forge a deep bond, based on their fascination with simple experiments in electricity.Decades later, Jamie is living a nomadic lifestyle of bar-band rock and roll. Now an addict, he sees Jacobs again - a showman on stage, creating dazzling 'portraits in lightning' - and their meeting has profound consequences for both men. Their bond becomes a pact beyond even the Devil's devising, and Jamie discovers that revival has many meanings.This rich and disturbing novel spans five decades on its way to the most terrifying conclusion Stephen King has ever written. It's a masterpiece from King, in the great American tradition of Nathaniel Hawthorne and Edgar Allan Poe.STEPHEN KING is the author of more than fifty books, all of them worldwide bestsellers. His novels include CARRIE, THE SHINING and MR MERCEDES.Many of his stories have been turned into celebrated films and television series including MISERY, THE SHAWSHANK REDEMPTION and UNDER THE DOME. Over the years, King has had various cameo roles in film adaptations of his books as well as playing rhythm guitar in The Rock Bottom Remainders, a rock and roll band made up of some of America's bestselling and best-loved writers.King was the recipient of the 2003 National Book Foundation Medal for Distinguished Contribution to American Letters. He lives with wife, Tabitha King, in Maine.