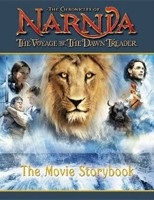 The Chronicles of Narnia return to the silver screen in winter 2010 with the eagerly awaited Voyage of the Dawn Treader, the most exciting Narnia film yet. The intrepid Edmund and Lucy return to Narnia – with their beastly cousin Eustace in tow – on the ship The Dawn Treader, where their old friend Prince Caspian is searching for lost friends of his father's. As the children take to the Eastern Seas in their hunt for the friends they find themselves embroiled in a dangerous adventure that leads them once again to Aslan the lion. This movie storybook brings the thrilling story to life with full colour movie stills!