Geopolitics of the central european region 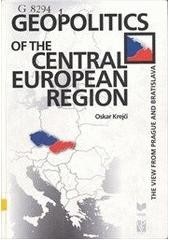 Geopolitics of the central european region

Central and Eastern Europe has a long history of, on the one hand, ethnic conflicts and, on the other, of a revolutionary tradition against expansionism. Both have their roots in the geographical situation and ethnic composition of the region. All these problems have surfaced at times when the political status quo has been upset for some reason, such as after the two world wars and after the collapse of the Soviet Union.Both great powers bordering the Danube region-Germany and Russia-have strived to develop their own versions of confederations (Mitteleuropa and Pan-Slavic movements). Also, politicians and intellectuals of the countries affected have proposed various theories, and made initiatives for different forms of closer or looser confederative formations.This book examines the reasons for the failure of these initiatives, these reasons including such factors as ethnically-motivated political antagonism, and the lack of economic complementarity. Contributing valuable information on the problems of political and economic integration, which should not be forgotten in a period when the countries of the region are looking towards the European Union, expecting-realistically or not-the solution of their various conflicts.Contributors:Piroska Balogh, Eotvos Lorand University, Budapest [ELTE] * Gaspar Biro, Institute of Central European Studies, Teleki Foundation * Istvan Csucsuja, Babes-Bolyai University at Cluj * Agnes Deak, Jozsef Attila University, Szeged * Andras Gergely, ELTE * Gyoergy Gyarmati, ELTE * Peter Hanak, Hungarian Academy of Sciences; Central European University, Budapest * Laszlo Katus, Hungarian Academy of Sciences; Janus Pannonius University, Pecs * Bela K. Kiraly, City University of New York * Gyoergy Litvan, Institute of History and Documentation of the Hungarian Revolution of 1956 * Zs. Tibor Lukacs, ELTE; Central European University, Budapest * Ambrus Miskolczy, ELTE * Judit Palok, Office of the Commissioner of Ethnic & National Minorities * Janos Rainer, Institute of History and Documentation of the Hungarian Revolution of 1956 * Imre Ress, Hungarian Academy of Sciences * Ignac Romsics, ELTE * Gyoergy Szabad, ELTE; Hungarian Academy of Sciences