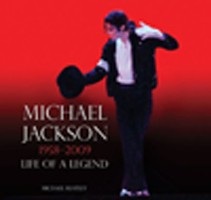 Michael Jackson was one of those rare human beings who can truly be described as a legend. As with Elvis and John Lennon, everyone will remember where they were when they heard about the death of Michael Jackson. He was just fifty when he died, but had become a superstar by the time he was eleven, ensuring his music was part of the fabric of everyone´s life. Though his days of greatest success were behind him, Jackson was standing on the threshold of what could well have been one of the biggest comebacks in showbiz history. It wasn´t to be, but the music, sales figures and the number of current stars who queued to pay tribute to his influence underlined the fact that, for all his controversial personal quirks, Michael Jackson was indeed one of the greats. This picture-packed tribute, charts the life of a legend, from his earliest days as a hyperactive child protege fronting family group the Jackson Five, to the assured superstar looking out from the cover of Thriller, still the best-selling album of all time. It analyses the magical stage moves like the Moonwalk that made him a sensational live act, celebrates the intoxicating music that made him the King of Pop and follows his life right through to the comeback that was to be cruelly cut short before the curtain could rise. Michael Jackson 1958-2009: Life of a Legend tells the larger-than-life story of a unique character whose musical legacy will never die.