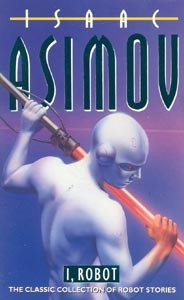 The classic collection of robot stories from the master of the genre. One of the Voyager Classics collection, now I, Robot is a major Fox movie starring Will Smith. In these stories Isaac Asimov creates the Three Laws of Robotics and ushers in the Robot Age. When Earth is ruled by master-machines, when robots often seem more human than mankind, the Three Laws ensure that humans remain superior and the robots are kept in their rightful place. But an insane telepathic robot results from a production error; a robot assembled in space logically deduces its superiority to non-rational humanity; and when machines serve mankind rather than individual humans, the machine´s idea of what is good for society may itself contravene the sacred Three Laws...Amazing and timeless robot stories from the greatest science fiction writer of all time.