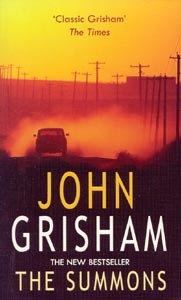 An intelligent, low-key thriller, The Summons continues John Grisham´s exploration of the common decencies of a strain of American commercial story-telling in literature and film that we often link to the work of Frank Capra or O Henry. He is not afraid of parable or of setting up situations that are at once archetypal and attractively specific. This is a tale of two brothers--one is righteous, more or less, and one is not--and a question of their inheritance. Ancient Mississippi judge Atlee summons his two sons to his deathbed, but dies before he can explain himself, leaving Ray, who arrives on time unlike his drunkard brother Forest with the difficult problem of the three million dollars in used notes which are lying around the house in shoe-boxes. Ray worries about his father´s posthumous reputation, about the Inland Revenue Service and about how quickly Forrest could drink himself to death with unlimited funds.