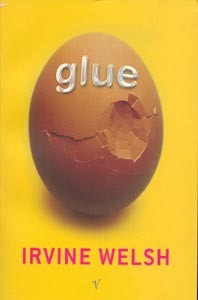 Glue is the story of four boys growing up in the Edinburgh schemes, and about the loyalties, the experiences - and the secrets - that hold them together into their thirties. Four boys becoming men: Juice Terry, the work-shy fanny-merchant, with corkscrew curls and sticky fingers; Billy the boxer: driven, controlled, playing to his strengths; Carl, the Milky Bar Kid, drifting along to his own soundtrack; and the doomed Gally - who has one less skin than everyone else and seems to find catastrophe at every corner. As we follow their lives from the seventies into the new century - from punk to techno, from speed to Es - we can see each of them trying to struggle out from under the weight of the conditioning of class and culture, peer pressure and their parents´ hopes that maybe their sons will do better than they did. What binds the four of them is the friendship formed by the scheme, their school, and their ambition to escape from both; their loyalty fused in street morality: back up your mates, don´t hit women and, most importantly, never grass - on anyone. Despite its scale and ambition, Glue has all Irvine Welsh´s usual pace and vigour, crackling dialogue, scabrous set-pieces and black, black humour, but it is also a grown-up book about growing up - about the way we live our lives, and what happens to us when things become unstuck.