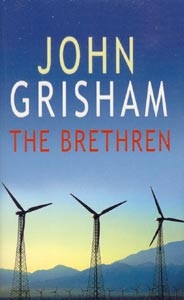 John Grisham´s novels have all been so systematically successful that it is easy to forget he is just one man toiling away silently with a pen, experimenting and improving with each book. While not as gifted a prose stylist as Scott Turow, Grisham is among the best plotters in the thriller business and he infuses his books with a moral valence and creative vision that set them apart from their peers. The Brethren is in many respects his most daring and accomplished book yet. The novel grows from two separate subplots. In the first, three imprisoned ex-judges (the brethren of the title), frustrated by their loss of power and influence, concoct an elaborate blackmail scheme preying on wealthy closeted gay men. The second story traces the rise of presidential candidate Aaron Lake, a man essentially created by CIA directory Teddy Maynard to fulfil Maynard´s plans for restoring the power of his beleaguered agency. Grisham´s tight control of the two meandering threads leaves the reader guessing through most of the opening chapters how and when these two worlds will collide. Also impressive is Grisham´s careful portraiture. Justice Hatlee Beech in particular is a fascinating, tragic anti-hero: a millionaire judge with an appointment for life who was rendered divorced, bankrupt and friendless after his conviction for drunk-driving homicide.